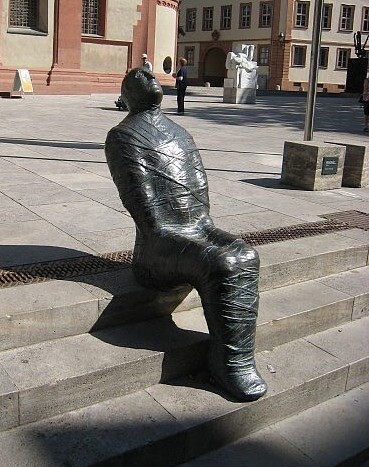 Behind Dom St.Kilian you can see an iron statue of a sitting man on the stairs who is said to be a victim of bureaucracy and here you will learn why. Well, the museum you can see on your left was rebuilt some years ago and so was the square we are standing on now. City planners wanted to take the opportunity to renew this part as well and in doing so, these stairs were built in order to create an architectural visually appealing square. But as you can see, these stairs are not clearly limited by a wall or a landing. Hence, the administration of Würzburg was of the opinion that the stairs could not be noticed easily and that would be dangerous especially for old people. So the museum being responsible for this square was told to build a handrail in order to mark the stairs. Thinking that a handrail would look unaesthetic, the museum decided to mark the stairs with a work of art which is the sitting man. After all this background information, I would like to go into the statue itself. The represented person is obviously a man who is bound with bandages covering his whole self but his head. Despite of that, he is looking up. One might interpret that his upturned head represents the fact that, even if his body is numb, his mind is not at all since he is looking straight up to the spacious sky which signifies his intellectual freedom.